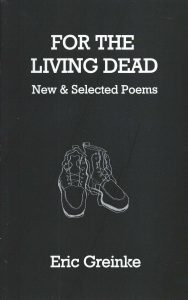 Critically-acclaimed American poet Eric Greinke has selected 109 of his best poems for this extensive collection. The poems date from 1969 through 2012, and include thirteen new poems and his prize-winning long poems For The Living Dead and Beyond Our Control (with Hugh Fox). The poems were originally published in a wide variety of top literary magazines such as Abraxas, The New York Quarterly, the California Quarterly, The South Carolina Review and the Paterson Literary Review. Greinke’s poetry has been praised for its thought-provoking, multi-leveled, often dreamlike imagery and his creative, stylistic range. Although he employs several divergent compositional processes, his work is sustained by a distinctive and recognizable voice. His tones range from ironically humorous to elegiac, sometimes in the same poem. Many poems, such as Flood Tide, April and Persona, show a strong lyrical presence. New poems such as the award-winning Shooting Lessons, exhibit Greinke’s unique use of lyric devices within an autobiographical narrative.

“Eric Greinke’s For The Living Dead: New & Selected Poems gathers poems from 1969-2012 and shows the breadth of Greinke’s work.  The poems are tough, tight, simple and beautiful.  The improvisational feel of the lines, and the short sentences punch sounds like a jazz sideman on Saturday night.  Greinke’s work is visceral, soulful, sometimes simple, but never simplistic.  The lyrics in the collection are balanced with narrative, and Greinke’s collection offers up a full plate for fans and new readers alike; the volume illustrates Greinke’s contribution to American verse.  The collection ends with Flood Tide, a Prufrockian elegy for love where death proves to be the great isolator in a flood of sensory information.  The human spirit and condition are Greinke’s subject, and in this well-balanced collection offers up insight and music.”  — S. Scott Whitaker, Goodreads

“Eric Greinke’s latest collection of poems, For The Living Dead, covers over four decades of poetry, written from 1969-2012.  The poems here are arranged chronologically, which makes it fun to compare the older ones with the more recent and possible to trace the author’s development over his lengthy career.  We get bizarre images—like the weird landscapes of Salvador Dali, but strongly realistic in the presentation.  For me, the standout work of this 160-page book is the title poem, For The Living Dead.  The tone of the poem is elegiac, it is filled with zombies and robots.  The robots are both the programmed youth of today and the wonderful gimcracks we have developed with our progressive, seemingly unstoppable technology.  A veteran of the small press, Greinke is a widely published poet and essayist.  His work is firm, rooted in images and narrative.  He’s gentle and philosophical, always taking time for a few moments with nature.  A reliable, readable, thoughtful, current-day poet – one that deserves to be read.”    –John Berbrich, Blueline #35

“Greinke has a direct and conversational way with his words.  Readers who grab this book will e twisted and thrown through surrealist and bold spectrums as they move through the pages.  For The Living Dead contains a wide range of poetry from the author’s career, from 1969-2012 and it is simply amazing to watch a talented writer become seasoned through each turn of the page.  You almost think you get to know the poet through this wealth of material collected here, but I get the feeling there’s a lot more to steal away from the poet.  I would definitely recommend this collection to anyone who is interested in poetry or interested in starting out as a poet.  The book has great connections through each page and completely immerses the reader in his well-written lines.  This is simply a must have for all poetry lovers out there.”     –Weasel, Weasel Press

“Considering my age, it’s hard to wrap my head around a career that spans nearly forty years.  This collection features excerpts picked from just such a career, and going through them is fascinating.  The poems themselves are of a high quality, but watching the evolution of the author before your eyes gives it so many more dimensions.  Reading the earliest of them, unsure in style, like a fawn wobbling to its feet.  Filled with love, lust, sunny afternoons & declarations of life.  Watching it progress to experiments with surrealist language, reflecting trends of the time.  The years soon become farther & father between, and the writing more cynical.  Then a return to basics; a few simplistic works after a long break.  Then they ramp up again, featuring reflections on nature, time, society, all written with a much more confident hand.  The eponymous poem, lengthy and encompassing, a play on the zombie-like nature which the author has born witness to.  Then, as age sets in, the work takes on reflective quality; old friends, lovers, moments from childhood looked back on fondly or regrettably.  These moments give flesh to what would be just the bare bones of the words on the page, making this collection, in a way, the living dead; old words, times, experiences, never quite capturing the reality, but continue as the last trace of its existence.”   — Matt Lewis, Goodreads

“The living dead concept in this book’s title, common in religious literature, but an oxymoron to some, appears in science at sub-atomic dimensions where quantum mechanical effects are measurable, as popularized by Schrodinger’s Cat.  It’s an insight that deepens otherwise, lucid, simple, descriptive poems.  His words predominately less than three syllables, yield an over-all iambic meter, but more often with assonance than end-rhymed, more with alliteration than a marching beat.  Early-late comparisons show the influence of his long professional practice on his poetry, as for example in his 1972 “Triad” in which:  Witnesses swear / that water mixed with blood / splashed on the earth.  That is contrasted with the common place 2006 “Cape May Storm”:  When the soaked house / Dries in the sun / Clouds of steam rise up / & naïve strangers alert the firehouse. His skepticism is consistent as is his love of capturing the moment, haiku-style, freed of a rigid five-seven-five syllable structure.”

— Richard Aston, Off The Coast