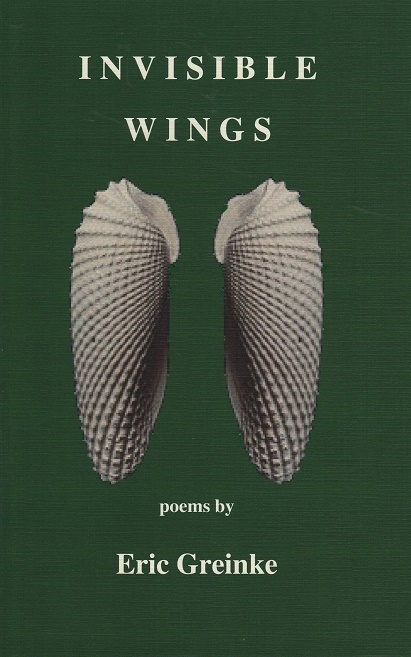 In his first poetry collection since 2014’s Pulitzer and National Book Award nominated For The Living Dead – New & Selected Poems, these forty-four new poems by Eric Greinke evoke and illuminate the metaphors and symbols of our lives through portraits, observed moments and personal memories.  These poems rely on descriptive imagery and an expansive persona often expressed in  third person to stimulate the reader’s associative imagination. Each poem explores our relationship with time and the monuments we leave behind. The book contains the award winning autobiographical narratives Lifelines and Paternity, in addition to poems in lyric, objectivist and persona modes.  Readers who have come to expect range and variety from this poet will not be disappointed.  At the age of seventy, Eric Greinke continues to expand his range, tonal repertoire and poetic vision, inviting his readers to join in the creative process in recognition of common myths and experiences.

“Eric Greinke’s latest collection of poetry Invisible Wings is a short and infinitely relatable assortment of verses that provide intimate slices of everyday life, focusing on everything from changing seasons to class reunions and family photos.  Greinke’s style is thoughtful and down-to-earth, which allows first-time readers to grasp and enjoy his creations, while simultaneously giving long-time fans more of the evocative verses for which the author is known.  Greinke’s work in Invisible Wings is exceptional—simple in structure and language and able to move and still readers at the same time.  He encourages his readers to closely examine all that is around them, within them, and beyond them, and he recognizes the power of small movements to shape and color every life.”

“In his newest poetry collection Invisible Wings, Eric Greinke explores the trials and tribulations of life and the consequences those experiences leave on himself and of those around him.  Many of these forty-four new poems are filled with the reflections of an older self looking back on past actions.  The poems found in this new collection can be broken down into three separate categories:  character driven, self-reflexive, and nature poems.  The first focuses primarily on the events and lives of those individuals that the narrator encounters.  The self-reflexive ones provide commentary on the narrator’s own life, and finally, the nature poems praise the beauty and serenity of nature.  Where the collection truly shines is in the moments when Greinke utilizes violence to create a memorable image in the mind.  In “Bullies,” Greinke uses violence to signal to the contradictory nature of defending oneself from others.  After years of ridicule and abuse by the neighborhood bully, the narrator reacts in an overly-violent manner, leaving the reader dumbfounded, yet this violence lends itself nicely to the overall message within the poem, that when acting out in self-defense, we become no different than the one harming us.  The opening line of the titular poem “Wings” effectively captures the tone and feel of this collection: “The ocean cannot be contained / but is can be heard inside a small shell.”  Greinke condenses years of life into an easily digestible bite.  Life is untamable, but through Invisible Wings, Greinke captures just enough for our stories to be heard.”          –Jorgan Bean, Pinyon

“Reading Invisible Wings is a bit like taking a vacation where the natural surroundings of a north Michigan lake become acutely, visually, and lyrically alive.  Meditative moments, from sitting fireside to walking alongside a summer beach, contrast with fabulous story-telling—where the author relies moments from his life as well as compelling narratives about strangers and friend.  In the unflinching pursuit of the beautiful and the tender, Greinke finds his home.”       –Ann Cefola, Goodreads

“Eric Greinke is a poet with a moderate pallet and a subtle intelligence.  His poems notice things, ordinary things, and pursue them; he is curious but he treads lightly and could easily be disregarded because of his plain-spoken disguise.  He is worth slowing down for.  In his latest collection of 44 short poems, Invisible Wings, every sound and cadence rings true, if the reader listens carefully.  The first poem in the collection is “Wings,” where Greinke flirts with the cosmos whose stars were named after “ancient Gods” and whose direction spreads like an (imagined) expanding universe.  Its energy is not showy or boastful, and Greinke delivers in a style of language that one could call, without error, plain.  Yet, much of the ordinariness in the footsteps of the lines causes a likely embarrassment for one who suddenly realizes that the poem she’s reading has got quite out of hand.  To recognize the power of the Greinke’s language, his eschewing of sensation, his insistence on exactitude, is to grope about, “blind in every dimension / but our poor human senses.”  But arise!  We must scramble to keep up with the fusions, dimensions, disasters, collisions, with each “atom alone but connected.”  Really, you have to run to keep up with what’s going down.  One knows that the speaker must go down to the pillow, that the leaves “lately adrift” are gathered meaningfully in one place now, a place for love and rest and thinking.  Greinke is a listener.”                           -Marcia Ross, Boston Area Small Press and Poetry Scene

“If you’ve never been to a high school reunion, in his poem of that name, Mr. Greinke gives the lowdown on what is typically revealed. Near the center of the book, this poem indicates one of the primary themes:  the memory-based stories we tell about people are often remarkably similar, showing the commonality of “human nature,” connecting us.  Interspersed with the brief character studies are poems of humans in nature.  With his poet’s palette, we are reminded of the simple, joyful pleasure nature can provide or inspire.  Nature brings out some of his best description (Branches on the side of the brook / Shake in the downpour, like a laughing man.).               –Phil Wagner, Iconoclast

“With more than 20 books of poetry, fiction and criticism, Eric Greinke is a long-time fixture on the literary scene.  His poems in Invisible Wings demonstrate a gift with final lines that jolt the reader like unexpected bullets.  “No blood on our hands yet, just mercy and hope” (Another Old Photo).  He also startles with incredibly apt observations:  in Breakfast For Paranoids, the pitbulls in a truck “waiting hard for their breakfast.”  In Cruel April “a maternal white pine.”  In Fly Fishing in the Rain “branches. . .shake in the downpour like a laughing man.”  Each of the 44 poems in this new collection offers an image or insight that goes deep beneath the surface where the genuine fires burn at the core.  This is a book to read in one sitting and then to return to again and again.”      –Joan Colby, Goodreads