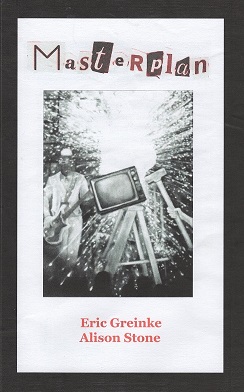 Widely published poets Alison Stone and Eric Greinke wrote these seventy-three inventive poems together from February, 2014 to April, 2017.  Although they each wrote an equal number of lines in each poem, they used a variety of patterns, ranging from simple, every-other-line patterns to more complex forms wherein they alternated beginnings, middles, endings and titles.  The tone of these poems is varied too, ranging from ironic and humorous to philosophical and elegiac, from narrative to lyric. Many of the poems were first published to critical acclaim in independent and university literary magazines such as Big Scream, First Literary Review – East, Forge, Iconoclast, Lake Effect, Plainsongs, Switchback and Wild Goose Poetry Review.  Includes a cover painting by Alison Stone, who is also a serious painter/illustrator.  At the forefront of the collaboration movement, Eric Greinke is the author of the recently released The Third Voice – Notes on the Art of Poetic Collaboration (Presa Press, 2017).  This is his eighth collection of poetic collaborations since the early seventies.  The voices of Stone and Greinke blend seamlessly into a bold third persona, a gender-neutral and ageless punk poet who can both whisper and shout.

“Masterplan is a successful poetry collection based on at least two elements:  1) the poems are effective for providing reading pleasure and keeping the reader interested, and 2) in being collaboratively written, the poems present a personal different and separate from the poets—these are poems that could not be written individually by either poet, reflecting an expansion of both poets’ imaginations, which is of course what’s desired in collaborations.  The poems work partly by not revealing its seams, i.e. where one poet contributed lines and the other contributed others.  I’ve read many other collaborations between poets but it’s the poem “The Weight” that impressed upon me most the talents of both poets.  Here’s the poem:

The Weight
We believed we were alone, so we never saw it
coming. We should have known our parents and
ex-lovers were always there, waiting for the first
thrill to fade.  We never should have trusted our
dogs and cats to keep our secrets to themselves.
A clean slate’s an illusion.  Our flesh is cinematic
and wounded cosmetically. Our hearts are
kaleidoscopic and ravenous.  Tabla rosa is a
delusion.  The only thing to do is lumber forward,
clumsy with the weight.  That’s what puts the ‘fat’
in fate.

If you take each of the sentences in the above poem and laid them out individually (instead of collapsing them together in a prose poem form), you could notice more easily a seeming (or immediate) lack of logical narrative linkages between each sentence.  Any connection between sentences requires that the reader spends time pondering them.  It’s a subtle, effective way of enabling the reader to inhabit the poem.  And, yes, inevitably all of the sentences do manage to cohere, which is how a poem surfaces.  What finally makes Masterplan a cut above some other collaborations is its variety of tones.  Whoever this poet personal is that was created by both poets, it’s a multifaceted persona whose wide-ranging poems keep the reader’s attention.  The third author created by Stone and Greinke may have created something for every reader and validates both poets’ decisions to write something by relying on someone else’s contribution.  They expanded themselves by releasing authorial ego, and we as readers benefit.”         —  Eileen Tabios, Galatea Resurrects

“Masterplan is a book to read at this moment, a collaboration that addresses the 24/7 news cycle, rampant consumerism, and pop culture.  Some of the poems hit as hard and as fast as a two-minute punk song, while others are meditative and lyrical, quiet celebrations of the natural world.  The book, written over three years, has its finger on the zeitgeist, with subjects ranging from mass shooting, to Middle East conflicts, to deceased rock stars. As a collaboration, Masterplan works well.  That Greinke and Stone wrote an equal number of lines in each poem leads to some nice surprises, including an ungendered speaker and a multifaceted voice that ranges from the deeply ironic to the philosophical.  It also creates unexpected and surprising shifts in a majority of the pieces, especially through the juxtaposition of images.    While some poems may bemoan our hyper-consumerist culture, others remind us to be grateful for the natural beauty around us, as hard as that may be in this noisy world.”

“The cover of this highly stylized collaboration, by two first rate poets, is of a rock guitarist being showered with sparks, from an exploding TV, falling from a ladder, impelled into oblivion by an unseen person wielding a sledge hammer. Not only is this an effective image but it conveys the sense of boundary shattering poems these two poets create together.  Work ranges from short, five line, “Little Novels” (from an idea by the venerable Kirby Congdon) to longer, full blown, and mind bending, longer poems.  Some are funny, some are serious to the extreme and all are challenging, highlighting the seamless application of the poet’s art.  It is unclear who did what and how and that is how it should be.  Anyone interested in the collaborationist’s art will want to own this book.”

“In this collaborative full-length collection, Eric Greinke and Alison Stone each lend their unique talents for stunning imagery and deft phrasing to create a wealth of seamless poems.  Their individual voices, while quite different, harmonize to create a distinctive “other,” a third unique speaker whose observations are unpredictable and delightful.  The poems are varied:  they touch on many subjects and take on many forms.  They evoke diverse moods, from intense reflection to lightly humorous.  We are introduced to the collection with “Emergency,” which considers that

Maybe that’s what it means to be
human, stuck in personal hungers,
ignoring or pretending to care
about everyone else,
one nation under fear
with justice for none.

The pang of recognition is painful:  it needles the reader and beckons them to explore further.  We long for authenticity, for connection; this description of shared indifference is a not-so-gentle prod to act upon that wish for ourselves should we find the strength.  Yet is also helps us realize we are not alone.  “The Price” is a jumble of feelings:  it blends gentle cynicism, wonder, humor, and intellectual appreciation.  This poem is not purely image-driven in the conventional sense; it inspires the reader to feel the images as opposed to depending on a written description.  The concluding section of Masterplan is a study in feelings which unite us even as they provoke our feelings of loneliness. The simple human appeal of these poems is in their capacity to ‘relate the relatable’ – the natural tender wish for peace, the abstract process of becoming inured to violence, the ache for natural expression, the recognition of the eternal in the now.  “Final Heat” evokes this last fluently:

. . . There’s still time
for a few leaps into a lake,
or one last trip to a dusty
amusement park before the
water’s chill evicts us
and the wooden
horses clip-clop away.
Long-gone stars glow here
and now, light years away
from an unknown tomorrow.

“Alison Stone and Eric Greinke get it right when they muse beyond gender and hit a norm we can all recognize.  The sum is better than the parts when these two collaborate.  In Masterplan, both Stone and Greinke are invisible, instead we have a third entity and a new voice.  This third entity has a monster sense of humor.  Greinke and Stone harmonize so well you only hear one voice, clear and certain.  In the middle of all this fun, Greinke/Stone set us down in the second section of Masterplan, called “Little Novels,” in thirty-one five-line quintains, unrhymed.  These splendid diminutive movies play surprisingly thorough.  Each of the “Little Novels” punches you from a different direction and they come quick and heavy.  These poems are a muscle stretch for Greinke/Stone and a delight to read.  The two poets have cluster-images their id and ego until what comes out the other end is magic.  I can’t help but e impressed by the seamlessness of these constructions.  Usually when joining one thing to another there is a seam, a visible reminder, you can’t miss it.  Eric Greinke and Alison Stone’s Masterplan is masterfully built, you cannot see the space between the two poets.  It’s exciting to see optimistic poetry and Masterplan is brimming with hope.”                  –Michael Dennis, Today’s Book of Poetry

“The collaborative poetic voices of Eric Greinke and Alison Stone compliment each other in their co-authored 72-page tome, Masterplan published by Presa Press of Rockford, Michigan.  The poems do not credit either Greinke or Stone but they successfully vary in theme, form and subject matter.   The tome is full of both short and long poems of various forms that give clear images of modern life and relatable outcomes to how people react to and interpret situations.  I liked the seamless mixing of two voices in a clearly successful collaborative endeavor.”                         –Lynette G. Esposito, North of Oxford