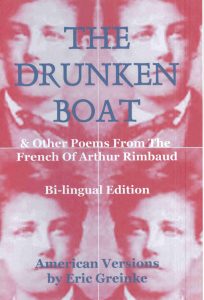 Known only to literati since its original small press publication in 1975, & two subsequent small press editions, widely-published poet Eric Greinke’s innovative American versions of Rimbaud’s best poems have received critical acclaim as the best translations of Rimbaud to date. These versions restore the music & imagery of the originals for English-language readers. Contains 35 of Rimbaud’s works accompanied by the original French, including Greinke’s hauntingly evocative version of The Drunken Boat, a poem considered by many to be the single best poem ever written in any language. Includes a twelve-page introduction by the poet-translator & an index of first lines. A ‘must have’ for all students & readers of classic poetry.