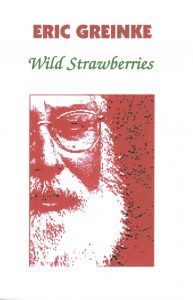 Wild Strawberries collects fifty-nine new poems previously published in three dozen plus literary journals such as The California Quarterly, The Iconoclast, The New York Quarterly and The Pedestal, from 2005 to 2008, by the critically acclaimed poet Eric Greinke.  The book’s central theme is man’s relationship to time and the natural (and unnatural) world.  Greinke’s poems are imagistic, thought-provoking and evocative.  He is a master of shifting moods and personae.  Includes the 180-line major poem For The Living Dead, which has been nominated by Muses Review as Best Poem of 2007 and also for a Pushcart Prize.  Eric Greinke is a major voice on the small press literary scene.  A must-have for all poetry collections.