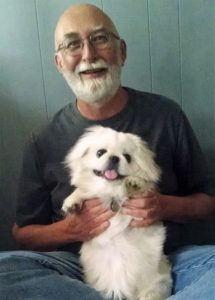 American poet Eric Greinke, b. 1948, Grand Rapids, Michigan, is a veteran of the U.S. Coast Guard, Vietnam Era. He has a Master’s Degree in Social Work from Grand Valley State University, in addition to undergraduate degrees in English and Psychology. Greinke has been active in the American small press since the late sixties. He has worked in the Michigan Poets In The Schools Program, taught Creative Writing at Grand Rapids City School, and was the editor and founder of GVSU’s national literary magazine Amaranthus (renamed The Grand Valley Review). Greinke attended poetry workshops during the 70’s with Ted Berrigan, Paul Blackburn, Robert Bly, Gregory Corso, Robert Creeley, Allen Ginsberg, Jerome Rothenberg, Jackson MacLow and Phillip Whalen, among others. In 1972 his poetry collection The Last Ballet was nominated for both the Pulitzer Prize and the National Book Award.  In 1975 Greinke was included in his first international anthology, For Neruda, For Chile (Walter Lowenfels, Ed., Beacon Press, Boston, MA, 1975).  As editor and publisher of Pilot Press Books from 1972-1977, he published many of the important poets of that period, including Robert Hayden, John Woods, Ben Tibbs, Herbert Woodward Martin, Thomas Fitzsimmons, Dudley Randall, Albert Drake and others. During the 80’s and 90’s, he stopped publishing his literary work to devote himself full-time to social work with emotionally and developmentally disabled children and adolescents.  Greinke founded Presa Press in 2000 and has since published over seventy full length books by contemporary American poets such as John Amen, Alan Catlin, David Chorlton, Joan Colby, Kirby Congdon, Hugh Fox, Ruth Moon Kemper, Richard Kostelanetz, Donald Lev, Lyn Lifshin, Gerald Locklin, Glenna Luschei, Gary Metras, Lynne Savitt, Harry Smith, t. kilgore splake, Alison Stone, and A.D. Winans.  His return to poetry was marked by the publication of his Selected Poems 1972-2005. In 2014 his poetry collection For The Living Dead – New & Selected Poems was nominated for both the Pulitzer Prize and the National Book Award.  2014 also saw his inclusion as one of twenty American poets in the international anthology The Second Genesis: An Anthology of Contemporary World Poetry (Anuraag Sharma, Ed., A.R.A.W.LII, Jaipur, India, 2014).  In 2017 he joined the staff of the Schuylkill Valley Journal (Philadelphia, PA) as a Contributing Writer.  Eric Greinke has addressed the issues of literary politics and poetic freedom through his essays and his poetry for five decades. He has been a champion of eclecticism, diversity and tolerance on the too often divided literary scene. His poetic style is wide ranging and has been influenced by French surrealism, the deep image and New York schools. He has done a critically-acclaimed translation of Rimbaud and has been an enthusiastic collaborator with other prominent poets such as Hugh Fox, Harry Smith, Richard Kostelanetz, John Elsberg, Glenna Luschei and Alison Stone.  In 2017 his book The Third Voice – Notes on the Art of Poetic Collaboration was published, marking the end of decades of collaborating with other poets.  Greinke’s poetry, essays, reviews and social criticism have been widely published in literary magazines, newspapers and online venues. His works have been translated into several languages, including French, Italian, Serbo-Croatian and Japanese. He is married with three adult children, and lives in a century old stone cottage by a Michigan lake.